When society perceives a word as offensive, or an act or object to which such an object refers as embarrassing and generally disagreeable, they replace it with a well known term which attempts to conceal their embarrassment. The new term is known as a euphemism, that is, a term that is a substitute of a less agreeable word. For instance, the word toilet has historically been a source of great social embarrassment. The truth is that the toilet as a physical structure or as a word, either written or heard, is in itself not a source of humiliation. It is the toilet associations which produce blushes and nervous smiles. The images of an individual in a toilet ‘doing the deed’ are the ones that humiliate. It is seeing through those toilet walls using our mental eyes; imagining what goes in there, that produces shame. A toilet is a private affair and a secret affair. No one wants to be caught with their pants down wiping their bottom.

The toilet has therefore become a necessary taboo. As a primary school boy in the 80s, the word “toilet” was unheard of. We used a more sophisticated term: lavatory, which the illiterate villagers called “lebeterii”. These buildings with fancy names were in effect pungent pit latrines of the crudest kind. I was later to learn of the word “toilet” before my JC. I have never liked the term particularly because naughty boys have the habit of erasing the “i” in the middle of the word so that it reads: “to let”. I have since learnt of numerous “toilet” euphemisms. Amongst these are “public conveniences”, “the gents or the ladies” derived from the outside labels which mark male and female toilets. In Canada they call toilets “washrooms” while the Americans are famous for calling the toilet “the restroom” or “the bathroom” even if it lacks an adjacent bathtub. In certain parts of England a toilet is known as a “water closet” or simply by its abbreviations “W.C.” At Oxford they call a toilet “the cloakroom”. The term may indeed be fitting Oxford’s formal setup, where gowns are worn for daily evening dinners.

It is not only the disturbing images of what happens behind closed toilet doors that has attracted euphemistic language use, words that refer to mental retardation or some form of physical disablement have also been replaced by political correct terms that makes speakers feel good about themselves. For instances, terms such as “idiot”, “moron” and “imbecile” were once neutral terms with no negative connotations. They were used to refer to delayed mental development in children. The meanings of these terms have since expanded to become insults referring to foolish individuals. The neutral meanings have been lost. Because of such loss the terms were displaced by the term “mentally retarded” which was perceived as neutral and not condescending. Later, speakers felt bad about themselves for using such a label and then created a host of other labels including “mentally challenged” “people with intellectual disability” “children with learning difficulties” or “special needs children”.

Terminology to describe physically disabled persons has also changed through the years to respond to what is politically correct at the time. During the times of Jesus, the streets were filled with the “lame” and the “crippled” and there were no “handicapped” or “disabled”. Lately we hear of the “physically challenged” and the “differently abled”.

The changes are not in English only. In the past few years they have found their way into Setswana. We used to have “difofu”, “digole” le “dinnana” now we have “batlhokapono” and “banalebogole”. Some Setswana euphemisms have been with us for a long time. The Setswana term for having sex is “go tlhakanela dikobo” meaning literally ‘to share blankets’! To urinate is “go ntsha metsi” or ‘to release water’. A condom is euphemistically called “sekausu” or ‘a sock’!

At one level, the terminological developments are interesting and appear as products of an extraordinarily caring society, while at another level they appear as silly products of rapid modernisation, deprived theorising and a weak terminology development systems.

The reason why people use euphemisms is largely for themselves. It makes the user feel good about himself or herself. It relieves from such a user, deep seated feelings of shame. Euphemisms do not change the referent (the object referred to in the real or imagined world). Euphemisms also do not in any way lessen the negativity found in the object. To call a toilet, a restroom does not expunge its foul smells, but it does make the speaker feel posh and creates a false perception about the nature and character of the referent. In certain cases euphemisms lack specificity such as when we call “marago” “diphularo” or “the behind”. The fact of the matter, we must finally concede, is that, as long as there is shame and indecency, there will forever be euphemisms.

A national crisis is looming. Old people are dying and many young people don’t reach old age. Bagolo or adults, are thinning out at an alarming pace while people in their 20s are ballooning (both meanings intended) rapidly. Statistics reveal that the over 60s are fewer than those in their 20s. It is increasingly a privileged state of the few to be referred to as mogolo. Or is it? It is this term mogolo which interests me greatly. MLA Kgasa in his column Motlapele (Mmegi, Vol.6, No. 44. 24-30 Nov, 1989) grapples with what it means to be a mogolo in a Setswana context. Writing under the title A re leseng go fora bana re re ke bagolo, Kgasa concludes that in a Setswana cultural context 21 years of age doesn’t make one an adult. A 21 year old, Kgasa writes: “O sale ngwana yo o laolwang, yo o kgwathisiwang ka lorato.” For Kgasa Setswana recognizes a 28 year old as an adult “yo o ka ikarabelang, a gorosa mosadi”, although he concedes, “le gale mosetsana o ka nna a nyalwa a le masome mabedi le boraro jalo.” He argues further that a 60 or 70 year old is not an old man, “Ke motho yo motona”. To be an old man you must be at least 80. It is clear from Kgasa’s brief discussion that matters of social responsibility and age are cultural and contextual.
The term mogolo throughout our social web is appropriated to serve various social functions. A few years ago when MPs were attacked for absenteeism, the response was swift and crude: “Lesang go tlhapatsa bagolo”. In this context the criticism constituted an insult, while the MP, merely on the basis of being an MP, and not because of age, was a mogolo. Perverse as this may seem, there is a way in which Setswana recognizes the holder of social responsibility as a mogolo. In Setswana when one marries, regardless of age, they immediately become mogolo. Conversely an unmarried man in his 70s, is considered culturally mosimane, a boy. Age has nothing to do with the definition of adulthood in this context.
Recently the young have appropriated the term mogolo and they have sucked all cultural viscera out of the term, leaving it hollow. Everywhere you go, you hear: “Ao, dumelang mogolo”, “Mogolo, o ne o re ke tle leng?”or “Mogolo, kana mme ga o dire sentle”. What does mogolo mean in these contexts? It certainly does not mean someone in their 60s or 70s. It is also not a term of respect; its use actually appears disrespectful. It is definitely not a term for those with social responsibility. It is a linguistic pig’s ear, a nightmare for lexicographers. Perhaps it is the development of a looming national crisis where old people are dying and many young people don’t reach old age. The term mogolo, like youth, is wasted on the young. Perhaps Kgasa was right: “Banana ke dikgomo tse di dinaka. Bagolo ke tse di tšhotšwa.”
The term faces similar tribulations faced by nkgonne (Ke itumetse nkgonne), ntsalaka (Wa reng ntsalaka?) and boss (Ga go na gore re ka reng, boss).
But does the term need preservation? Far from it, language is only a tool of communication. It is in a constant state of flux. Richard Chevenix Trench in a compelling paper delivered to the London Philological Society in that cold November evening of 1857 argues that “the ways into which language has wandered or been disposed to wander may be nearly as instructive as the right ones in which it has travelled: as much as may be learned, or nearly from its failures as from its success, from its follies as from its wisdom.”By the look of things the problem of who bears the label mogolo will continue to annoy us for a while as those imbued with youth wring the life out of the term and those seeking honour and recognition grumble and fight to keep it exclusively for themselves. Perhaps words have no meaning – only concepts do. Perhaps.
Posted by blog-designer at 8:00 am 2 comments:

"Pula" is a Setswana word form which is used in Setswana to represent three related meanings.

1. It can be used to mean “rain” as in: Fa ba goroga pula e ne e na. (When they arrived it was raining.)
2. A cry of well wishing as in: Pula! Batho betsho!(Pula! Fellow people!)
3. Botswana notes as in: Ba batla o duela ka Pula fela. (They want you to pay in Pula only.)

There are also multi-word Setswana units which include proverbs and sayings:

Here are patterns of PULA showing words which typically occur before and after PULA contextually. 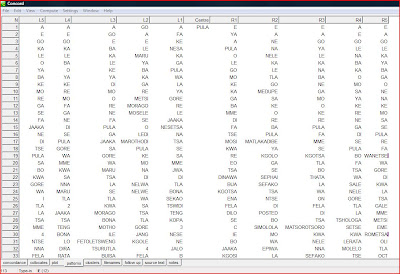 Here is a concgram for PULA. A concgram is "all of the permutations of constituency variation and positional variation generated by the association of a two or more words" 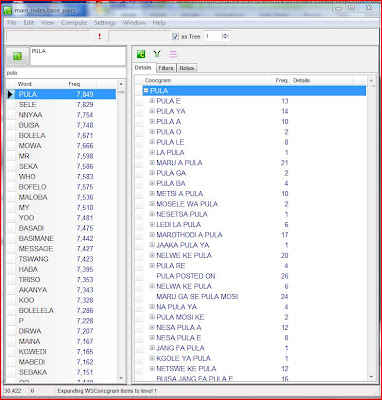 Here are some concordance lines of PULA. 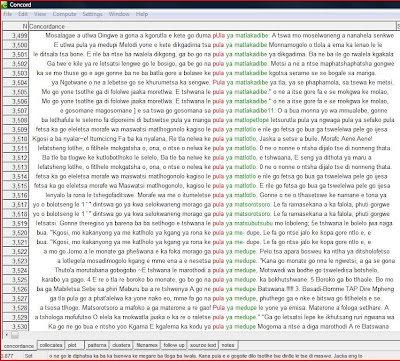 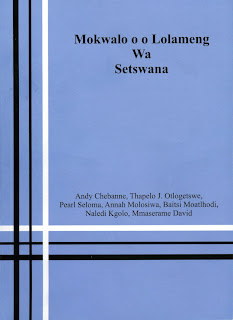 The last Setswana Orthography text was produced in 1981 which was in serious need of revision. Unlike the 1981 text, the 2008 text is written in Setswana. Work on the book was sponsored by OSISA and Tomela ya Puo Organisations. The book will be distributed for free to different media houses, Curriculum, publishers and other departments that work closely with the Setswana language. For further information about this publication please send me an email: otlogets@mopipi.ub.bw.
Posted by blog-designer at 7:49 am 2 comments:

If you speak Setswana, you know "solegela molemo" means "benefit". So you would say for instance Go tla kwano go tlaa go solegela molemo [Your coming here will benefit you.]. However I wonder if anyone out there has ever thought about the word solegela. I have never seen this word used on its own without molemo. What does the word solegela mean? Has anyone seen it used without molemo in any context? I have ran an experiment with a couple of million Setswana tokens to determine the collocates of solegela. This is a sample of what I got:

The evidence, even in its paucity, suggests that solegela is used with molemo. Perhaps those who know much about the etymology of solegela might help us with its unique meaning which appears to have been lost to the current Setswana usage.
Posted by blog-designer at 5:31 pm 12 comments:

Some lexical variations in Shekgalagarhi dialects.


Posted by blog-designer at 9:29 am No comments:

The following data is from Dr Monaka of the University of Botswana [Department of English] with minor additions from me.

Do you have a Setswana dictionary?